Rebels for a Cause students receiving a tree at the bill signing from the governor. Left to right: Rachel Mackley, Governor Kate Brown, Emma Monson.

She often heard freshmen arranging purchases with seniors during basketball games and witnessed groups of all ages vaping in cars or bathrooms between classes. The convenience store just a few blocks from school provided a steady supply for anyone 18 or older.

Emma didn’t think it was fair that kids were exposed to such a harmful addiction that could hook them for life. To take a stand, she joined the Providence Rebels for a Cause, a teen-led group in her school that encourages students to explore health issues and career paths while gaining leadership skills like public speaking. Their primary passion involved preventing tobacco use among younger students, and they spread their message by tabling at health fairs and speaking to middle school classes. Their name is a play on the idea that it is more rebellious to resist the tobacco industry than to smoke.

In February 2017, Emma and two other Rebels donned matching blue shirts with their message of “#21ForOregon” on the front and put their speech training into action by testifying before the state’s Senate Committee on Health Care. “I am here to defend the rights of my little brothers. I ask you to take a stand and protect a very vulnerable population of people who oftentimes do not have a voice of their own,” said Emma as she spoke in favor of raising Oregon’s tobacco purchasing age. 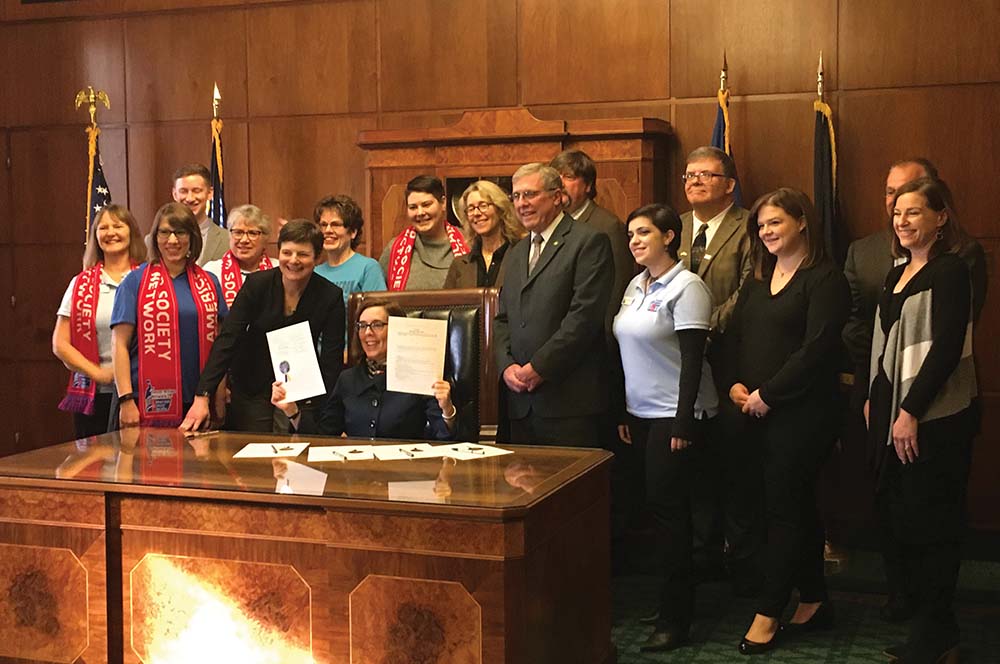 Supporters with Governor Kate Brown at the signing of the Tobacco 21 Bill.

They celebrated with the governor and other advocates later that summer when the bill, nicknamed “T21,” passed and was signed into law.

Public health advocates are proud to have helped Oregon become the fifth state to adopt such a law, especially given that the state’s yearly tobacco prevention program budget is about $8 million compared to the tobacco industry’s marketing expenditures of $108 million. They attribute their success, in part, to broad-based support from youth advocates like Emma, from doctors and from politicians on both sides of the political spectrum. Endorsement from a champion legislator was also critical. Senator Elizabeth Steiner Hayward, a family doctor in the Portland area, testified in support of the bill and served on the health care committee that held public hearings, asking probing questions and clarifying scientific evidence against anecdote.

Timing was also important. Advocates took advantage of existing momentum among key legislators around establishing a statewide retail licensing system. They were able to engage those legislators in supporting T21 by assuring them that passing the new law would be a quick win that would bolster the licensing efforts. Prevention specialists were also aware of the power of messaging. By listening carefully to local conversations around the state, they developed effective messaging to mitigate concerns about individual and business rights, enforcement and the potential loss of tax revenue.

The Tobacco Prevention and Education Program at the Oregon Health Authority marshalled scientific evidence into fact sheets and talking points advocates used to make their case in community meetings and public hearings across the state. They also answered technical questions from legislative aides about the economic and health impacts of changing the law. “We saw a lot of energy in communities around T21 as another option to address tobacco use and access by youth. It really made sense to people,” said Luci Longoria, MPH, Manager of Community Mobilization for Policy, Systems and Environmental Change.

Emma knew first-hand what is evidenced in many scientific reports — that most people who start smoking and become addicted do so before they are 18 years old. And that young brains are uniquely susceptible to both manipulative marketing and the effects of nicotine, which can impair decision-making. Raising the legal purchasing age can significantly decrease the primary driver of teen smoking — legal sales to people just over 18 who become “social sources” to younger teens. According to the Oregon Health Authority, raising the purchasing age to 21 could reduce the number of 15- to 17-year olds who start smoking by 25 percent and save 700 lives each year.

The new law, which took effect on January 1, 2018, and includes inhalant delivery systems like e-cigarettes, was part of the state’s larger strategy for reducing tobacco use that began in earnest in the late 1990s. Over the past 20 years, high-impact policies supporting clean indoor air and tobacco-free schools and workplaces have helped cut use in half, but the fight for healthy youth continues. “Despite our successes in tobacco prevention over decades, it still remains the leading cause of preventable death and disability in Oregon,” Longoria explains.

While advocates are celebrating their big win, they also acknowledge how much more there is to do. Vulnerable populations like the youth Emma mentioned, and others dealing with addiction, mental illness, disabilities and poverty are still at greater risk of addiction and poor health. “Our work is far from done, but it’s the right thing to do,” says Longoria.