Beyond One Patient at a Time By Allegra Abramo
Shortly after the recession in 2008, Dr. Gib Morrow began noticing full-page ads in Bellingham-area newspapers touting the economic benefits of building a coal-export facility at nearby Cherry Point. The plan would send an additional 18 daily train loads of coal rolling across Washington state and up the coast, where it would be shipped to Asia.

As an internal medicine doctor, Morrow worried that no one seemed to be talking about the potential health consequences of the proposal. “Something seemed a little bit wrong,” he says.

As other local physicians in Whatcom County, Washington, began expressing similar concerns, Morrow joined them in an effort to broaden the debate. Calling themselves Whatcom Docs, the group released a statement detailing the likely health and safety impacts of the project, including lung disease from exposure to diesel particulates and coal dust, and cognitive impairment of children exposed to more train noise, and emergency transport delays at railroad crossings. More than 300 doctors and nurses eventually signed on to the statement.

“I think people pay attention to things when their doctor takes a stand on an issue,” Morrow says. Through editorials, presentations and conversations with public officials, Whatcom Docs helped sway the debate about the coal terminal, and concerted opposition by the Lummi Nation finally killed the project in 2016.

That experience helped galvanize Morrow’s desire to pursue a master’s degree in public health after more than 25 years of practicing medicine. Now in his second year in the Online Executive MPH program at the UW School of Public Health, Morrow is excited to relaunch his career with a new focus on tackling systemic issues that perpetuate social and health inequities. “The health care system is a fundamental way of reducing inequity in our society,” Morrow says. “And it is very much underutilized in that capacity.”

For Morrow, lessons about the interplay between health, public policy and social inequities started early.

He was born to American parents in Japan, where his endocrinologist father was studying the long-term effects of the atomic bomb on the citizens of Hiroshima. Later, growing up in Detroit through the riots of the late 1960s, conversations about racism and inequality were common at the family dinner table, infused by the perspective of his historian mother. Concern for social justice “is kind of in my blood,” Morrow says. 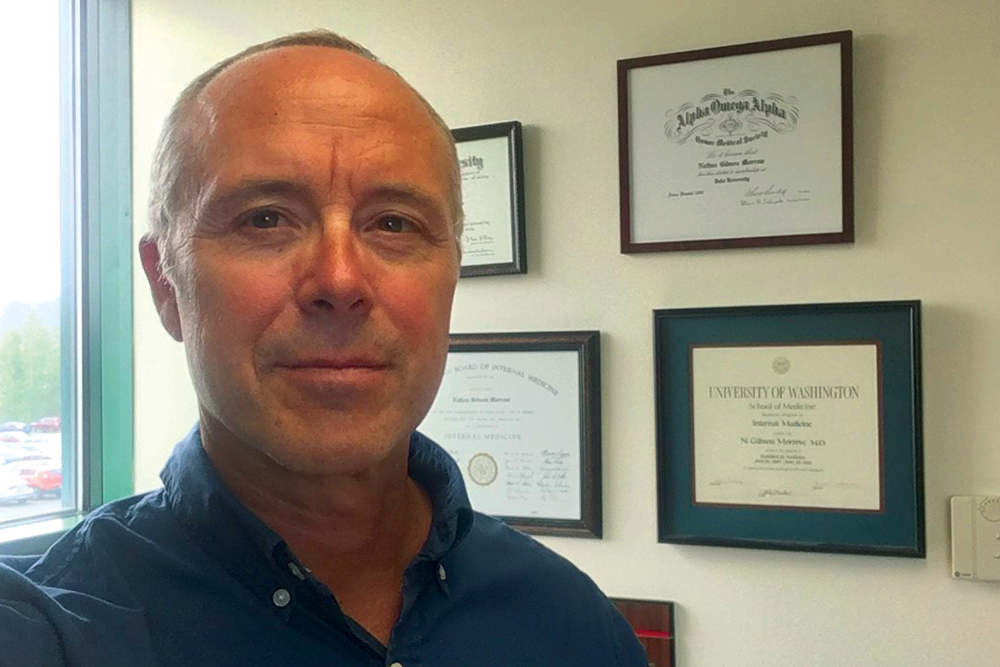 That concern has informed a career spanning continents and cultures. During his fourth year as a medical student at Duke University, Morrow worked at a public hospital in Zimbabwe and for the Indian Health Service in Alaska. He went on to practice medicine on the Navajo Nation in New Mexico for three years. Later, as the internal medicine department chair for the former Saint Joseph’s hospital in Bellingham, he helped start a hospitalist service to care for uninsured patients.

When Morrow began feeling “burned out and disillusioned,” a sabbatical with New Zealand’s national health service reinvigorated his passion for medicine. “I had a bit of an epiphany about the fact that the practice of medicine is really an amazing job even with all the unnecessary complexities that we have created in our American health care system.”

Morrow says that after returning to his job with Peace Health Medical Group, where he still sees patients today, “It gradually dawned on me that there’s more to life than seeing 20 patients a day and measuring your success by how much revenue you generate each month.”

With both of his daughters leaving home for work and college, Morrow was looking for a new intellectual and professional challenge. He’s found that in the Online Executive MPH program, geared toward professionals like himself. Through distance learning and six onsite sessions with what he calls a “phenomenal group of really impressive” students and faculty, Morrow has already been learning and applying skills in leadership, epidemiology and health program design and evaluation.

For the next chapter of his career, Morrow hopes to apply these skills to a health officer or director position at a public health agency or nonprofit. His ideal role, he says, would include improving affiliations between the health care system, social services and public health organizations.

“Having Gib come into public health, I couldn’t be happier about that,” says Dr. Frank James, clinical assistant professor of health services in the School of Public Health and one of the leaders of Whatcom Docs. A smart, dedicated doctor like Morrow, armed with strong public health skills, can save many lives, James says.

“This,” says James, “is a man who is trying to make a much bigger impact on the world than just what you can do seeing one patient at a time.”