Creating healthier communities is the aim of the research, teaching and service at the University of Washington School of Public Health. Here is a sampling of the School’s local, national and global impact. To view a comprehensive list of stories, visit the School’s website: http://sph.washington.edu/news/archive.asp 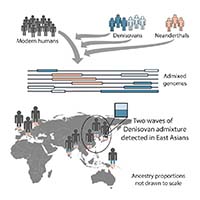 Modern humans intermixed with another species of ancient hominins, the Denisovans, not once but twice in history, according to a study by Susan Browning, professor in the Department of Biostatistics. The discovery suggests that Denisovans lived widely across Asia and co-existed with our ancestors. Denisovans were unknown until 2010, when scientists found a bone fragment and molars in a cave in Siberia. DNA sequencing revealed a new genome different from that of other known hominins, such as Neanderthals. Scientists already know that the genomes of certain populations, such as Papuans, contain about 5 percent Denisovan ancestry. Using a new technique to assess segments of ancient DNA in the genomes of 5,600 living humans, UW researchers found that East Asians — especially Han Chinese, Chinese Dai and Japanese — also carry Denisovan DNA. 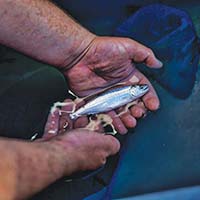 Juvenile chinook salmon migrating through contaminated Puget Sound estuaries pick up drugs that may affect their survival and growth when it matters most. This is a discovery made by the UW Superfund Research Program (SRP), where researchers work to illuminate important connections between environmental pollutants and human health. The SRP, led by Evan Gallagher and housed in the Department of Environmental & Occupational Health Sciences, was one of the first national university Superfund research centers in the country when it was founded in 1986. Superfund sites are highly contaminated properties designated for cleanup by the U.S. Environmental Protection Agency. Among the SRP’s other projects is a study led by Professor Zhengui Xia exploring the molecular and cellular effects of cadmium on olfaction and cognition, as well as an ongoing study of arsenic in shallow urban lakes. Investigator James Gawel and his students recently discovered that Lake Killarney in south King County has levels of arsenic more than six times the recommended amount. 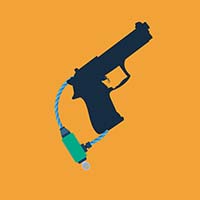 A UW study found that 63 percent of firearm-owning households in Washington state do not store their firearms locked and unloaded. Seattle Mayor Jenny Durkan highlighted the research in a legislative proposal to the Seattle City Council to require safe storage of guns. The study, led by Erin Morgan, a doctoral student in the Department of Epidemiology, was funded by Grandmothers Against Gun Violence. The mayor’s statement also cited gun violence research conducted at the Harborview Injury Prevention and Research Center. The council unanimously passed the law in July and several other Washington cities followed suit. The measure is scheduled to take effect in January 2019, pending a legal challenge.
Image by Annie Pellicciotti

Testing interventions to improve health in the Amazon 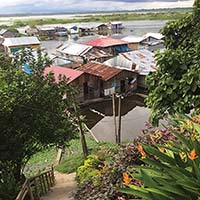 An interdisciplinary team of researchers, including Joseph Zunt, professor in the Departments of Neurology and Global Health, is working to improve the health and living conditions of a floating community in the Peruvian Amazon. From cleaning contaminated water to improving food security, the researchers are implementing innovative interventions to enhance both the built and natural environments in the village, called Claverito. Home to about 280 residents — mostly indigenous people — the village is located on the banks of Iquitos, the region’s capital. People live in makeshift houses on the water, which contains high levels of E. coli. The informal settlement is not recognized by the government and lacks water and sewer services. The research team will measure success based on the “before and after” health of village members.
Photo by Rebecca Neumann and Leann Andrews

Homelessness as a Public Health Crisis 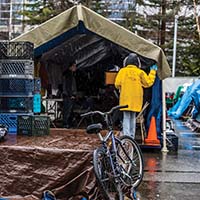 The number of unsheltered homeless people in King County is on the rise, creating a range of health risks. In 2017, 169 homeless people died. SPH Associate Professor Emeritus Bill Daniell, one of three health professionals on the King County Board of Health, led an effort to declare unsheltered homelessness a ‘public health crisis.’ The board agreed. It also voted to issue guidelines and recommendations to local jurisdictions to provide temporary mass shelter before bad weather arrives. Daniell argued that would allow for more efficient delivery of health care, social support and navigation resources. Several UW faculty and students testified in favor of the declaration. While not a cure for homelessness, they said, emergency shelter is a necessary interim step. SPH Dean Hilary Godwin told the board the guidelines would “send a powerful message for all of us to do better.”