Maternal Deaths: the Tip of the Iceberg

Investigating and preventing the deaths of mothers in Washington state 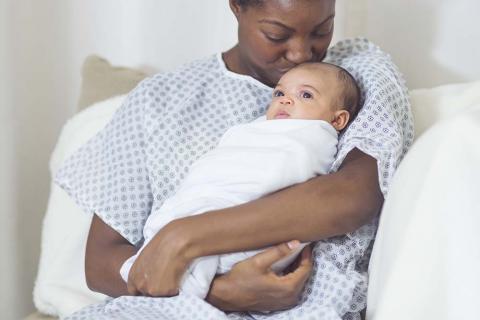 By Allegra Abramo
More pregnant women and new moms are dying in America today than in recent decades, but the reasons for this tragic trend — and the solutions — aren’t always clear.

In Washington, that has sparked a renewed effort to closely examine every maternal death and find ways to prevent future ones.

Thanks to advocacy by Washington’s medical and public health communities, the state legislature in 2016 created and funded a new maternal mortality review panel to study each death and recommend steps to reduce fatalities. The panel’s first report, released last year, is spurring policy and practice changes to improve care for women who are most at risk and reduce disparities across race, income and geography.

Those numbers indicate that Washington is actually doing quite well with maternal mortality, says Dr. Sarah Prager, an obstetrician-gynecologist on the maternal mortality review panel and an adjunct associate professor in the Department of Health Services at the School of Public Health. The state’s rate of pregnancy-related deaths, at 9 per 100,000 live births, remains below the national average, which climbed from 7.2 per 100,000 in 1987 to 17.3 in 2013.

“But when you tease the data apart, you see these huge disparities by race and ethnicity,” Prager says. “There was maybe some sense of that before we had these data, but I don’t think it came across quite that starkly.”

American Indian and Alaska Native mothers in Washington are eight times as likely as white women to die from accidents and other causes not directly related to pregnancy. For non-Hispanic black women, the death rate is three times that of white women. The number of pregnancy-related deaths was too low to make such comparisons.

Women with lower incomes and those living in rural areas, where access to care can be more challenging, are also at higher risk of dying during and after pregnancy.

One startling fact found by the review panel was that all 16 women who died of pregnancy-related causes in 2014–2015 had health insurance coverage. “Closing these disparity gaps will require the long-term, difficult work of addressing social determinants of health,” says Lacy Fehrenbach, director of the Office of Family and Community Health Improvement at the Washington State Department of Health. That could include policies that support living wages and family leave, and that reduce education and income inequality. It will also require looking at women’s experiences of racism, and how the resulting chronic stress affects women’s health, Fehrenbach added. “That’s what will really bring the numbers down.”

The maternal mortality review panel’s wide-ranging recommendations also include addressing the unrecognized biases and prejudice that can affect the quality of health care, improving access to mental health and substance use treatment for women who are pregnant or parenting, and expanding access to Medicaid through the first year after pregnancy.

Review panel members and perinatal health care experts have begun to tackle the panel’s recommendations. One work group, for example, is developing guidelines to care for women with very high body-mass index, since obesity was found to be a contributing factor for maternal deaths.

Another group, which includes medical examiners and pathologists, is working to improve maternal death investigations. Currently, not all maternal deaths are autopsied, in large part due to funding shortages. As a result, the factors that contributed to those deaths can remain hidden. The group recommends that all women who die within 42 days of giving birth receive autopsies, if the legislature will fund the work. They are also developing first-in-the-nation guidelines for maternal death investigations, which could become a model for other states.

Developing such targeted interventions is now possible because, under the new law, the maternal mortality review panel gained access to important context that helps them understand the underlying causes of each woman’s life and death.

In the past, the state completed sporadic reviews using only the limited information available on death certificates, and those efforts ended in 2012 due to resource constraints. Now the review panel may also access women’s medical records and, where available, death investigations. That allows them to gather details of each woman’s health and medical care before, during and after pregnancy, as well as her family life, education, employment and other factors that may have played a role in her death — and then assess what might have prevented it.

Aggregated across all women, that information illuminates the root causes of maternal deaths and informs system-level changes, Fehrenbach says. Those changes, in turn, can improve the health status of all women.

Maternal deaths “are the tip of the iceberg,” Fehrenbach explains. For each death, an estimated 100 women experience severe health conditions or complications related to pregnancy or childbirth that can have lifelong effects. “So we do this intense work on the small number of deaths to really transform the system of health for women.”